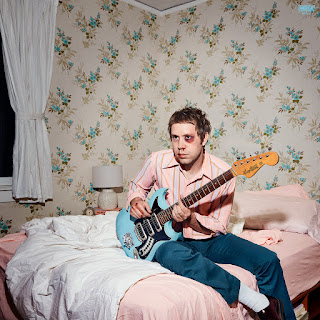 Disappointment, heartache, disaffection, impossible expectations, multiple overlapping messes?  Could be your life, could be our life.  And it happens to be the script for Power Chords, the new album by L.A.'s Mike Krol.  However, Power Chords also stands as a glorious example of loud, fuzzy, hook-filled indie rock and power pop.  There is plenty of noise, and plenty of musical sugar.  Moreover, while the production serves up the music well, enough ragged edges are left to remind us of the subject matter and the style.

To our ears, this is a complete package of vibrant, vital rock with a big heart and astute craftsmanship.  Of course, we have no idea whether it will catch on with the masses, but don't let it fly under your radar.  Get it, you won't be disappointed.

Power Chords is out now via Merge Records.

"Don't Let Go Of The Light" by The Golden Rail

And check out the full Sometimes When here. The Golden Rail are Jeff Baker, Dave Chadwick, Ian Freeman, and Saki Garth. 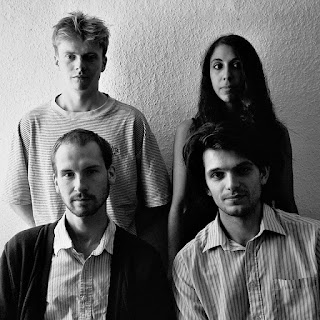 Left to our own unrestrained predilections, we would now provide effusive text regarding the wonders in West Bay Playroom, the upcoming album by Falmouth, UK's Holiday Ghosts.  However, the album won't be released by PNKSLM until February 15, and if we leak the news that it is one of our favorite albums of the year so far, we will have less to say when we actually do the work of writing about the release of the album.  So we will just encourage you to enjoy the video for album track "Slipstream", and save your pennies for the album next month. 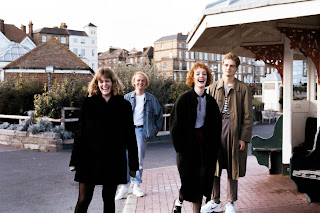 Midweek blahs -- we think everyone gets them, but the challenge is dealing with them.  We can settle in and wait for them to pass, or we can be proactive and wash them away.  Here at WMYA, we prefer the latter tactic.  So we will cue up some upbeat music to start our day.  Here, for everyone's benefit, is "Daddy Issues" by Dutch artist Pip Bloom.  Her debut album is titled Boat, and it will be released by Heavenly Recordings on May 31.  If opening track "Daddy Issues" is representative, it will be a good album.  We may have to play it every midweek morning.

Pip Blom will be at SXSW this year.

The Cupholders - The Tractor EP

I once bought a used German luxury car that I thought had every convenience I would need in my typical trip on the road.  But one day as I was driving with a beverage in my hand I decided to put the beverage in the cupholder (as the statute of limitations may not have expired, we will use the generic term "beverage", and in the singular).  However, this luxury car was a 1991 sedan that the German engineers had not equipped with a cupholder.  I guess Germans were expected to drive 100mph on the Autobahn holding their, um, beverage.  OK for them, I suppose, but they haven't seen Seattle traffic.

The point for us here is that cupholders are one of those conveniences that we don't think about until we need one and it isn't available.  But when we need one and have one, we cherish it.  And that brings us to The Cupholders.  You may not have known heard their music before.  OK, chances are very high that you have never heard of them.  However, now you will hear them, and you will want to hear them again and cherish them.  Today's edition is The Tractor EP, which is the first of a series of EPs dedicated to watering holes in the Ballard neighborhood of Seattle that have tolerated the members of The Cupholders over the years.  You will want to collect these EPs like those little Russian nesting dolls you Aunt collected, only while less colorful, the EPs will be a lot more fun.

The Cupholders are Bart Cameron (vocals/lead guitar), Casey Ruff (vocals/acoustic guitar), and Sam Russell (vocals/rhythm guitar), all veterans of other Seattle bands.  Friends Paul Beaudry, Kubby Casual, Dave Forrester, Colin J. Nelson, Ken Nottingham, and Shadrack Scott helped out with a variety of instruments and vocals, and Nelson recorded and mixed the songs.  The first song features Cameron, the second Ruff, and the third, Russell.  Don't ask me about the fourth song, I'm the guy who buys a car without a cupholder.

This is my kind of music, made by my kind of guys.  Like me, Cameron and Russell are from Wisconsin but have found their way to Seattle (Ruff is from Montana, but they have cows too, so it is all good).  This is honest, soulful rock, made for good times, good friends and plenty of beverages.  They will supply The Cupholders.