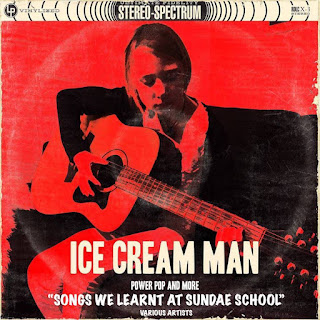 Summer heat has enveloped us, so naturally we think of ice cream and sweet tunes to take our mind off the oppressive temperatures.  So we think it is a good time to offer you Ice Cream Man Power Pop and More - Songs We Learnt at Sundae School.  This album is a compilation of 163 songs (yes, that it not an typo -- 163 songs) from various artists.  And it is a free digital download, by individual song or its entirety.

Ice Cream Man Power Pop and More is a Swedish radio station devoted to power pop and exposure of bands that haven't been signed by major labels.  And they perform a very welcome service.

The Catherines with two new songs

German jangle/fuzz pop maven Heiko Schneider, recording as The Catherines, is back to thrill us with two new tunes: "I Was Struggling With Your Magic Biscuit Tin" and the 'uncut' version of that song.  This dude drops one or more gems on us every month.  He is not yet more important to our lives than coffee and beer, but his star is rising steadily.  Explore more at the links to be found at his Bandcamp page.

Paul Ryan, aka Trip, aka Super 8, is preparing his third album release of the year (our feature on album #2 is here).  That sort of output is impressive under any circumstances, but is particularly welcome because Super 8 specializes in the sort of scrappy guitar pop that permeates our lives around here.  Writing about the new album would be premature at this point, except that album track "Good Times" is available right now as a free digital download.  So get a free song, get happy, get yourself some good times. 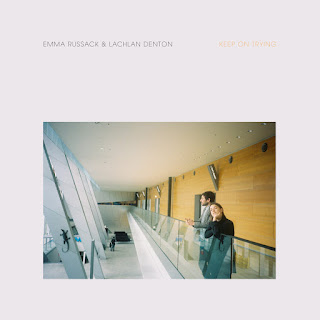 Music is something I need in my life, and I spend a lot of time and resources acquiring and listening to it.  I'll hear a song, or read about a new release from an artist I admire, and I'll decide that I really want that song or album.  But beyond "want", there is music that I need.   Music I need is music that fits my soul, and makes me feel more complete.  The name of Lachlan Denton has appeared here a number of times in recent years, and increasingly in 2018.  His work with The Ocean Party, his solo work, and his collaborations with Emma Russack all have filled me with joy.  And his and Emma's new Keep On Trying hits the level of soul-patching "need".

The songs on the album are a revelation.  Both Russack and Denton are capable of reflective compositions that mine the melancholy side of the street.  But here they seem to bring out an optimism and wry, if at times tentative, hopefulness in each other.  In fact, many of the songs are distinctly upbeat, relying on warm vocals, simple but affecting melodies, and a sparkling piano.  The album impresses on first listen, but for me its impact grows with each replay.  Music for the soul is like that -- affecting, satisfying, and needed.

Keep On Trying is out now in digital and CD formats via Osborne Again Music.


Bandcamp for Keep On Trying

Knife Knights brings together two treasured figures of the Seattle music scene.  One is Ishmael Butler, who former projects include Digable Planets and Shabazz Palaces.  The other is Erik Blood -- musician, composer, and producer.  And while Blood has moved to Los Angeles, his studio , and many meaningful connections, remain in Seattle.  While Butler and Blood have collaborated over the years, Knife Knights is, to our knowledge, the first time they have presented themselves as a band.  Based on the evidence provided below, we can lament that it didn't happen sooner.  The fruits of their union is the eleven track 1 Time Mirage, which will be released by Sub Pop in September.  The album finds the duo, and a cast of talented friends, in fine form, adventurously combining hip hop, shoegaze, and electronic, with a barrel full of bass.

We will have more on the album in a few weeks, but for now we suggest you stream the tracks below and watch the video.