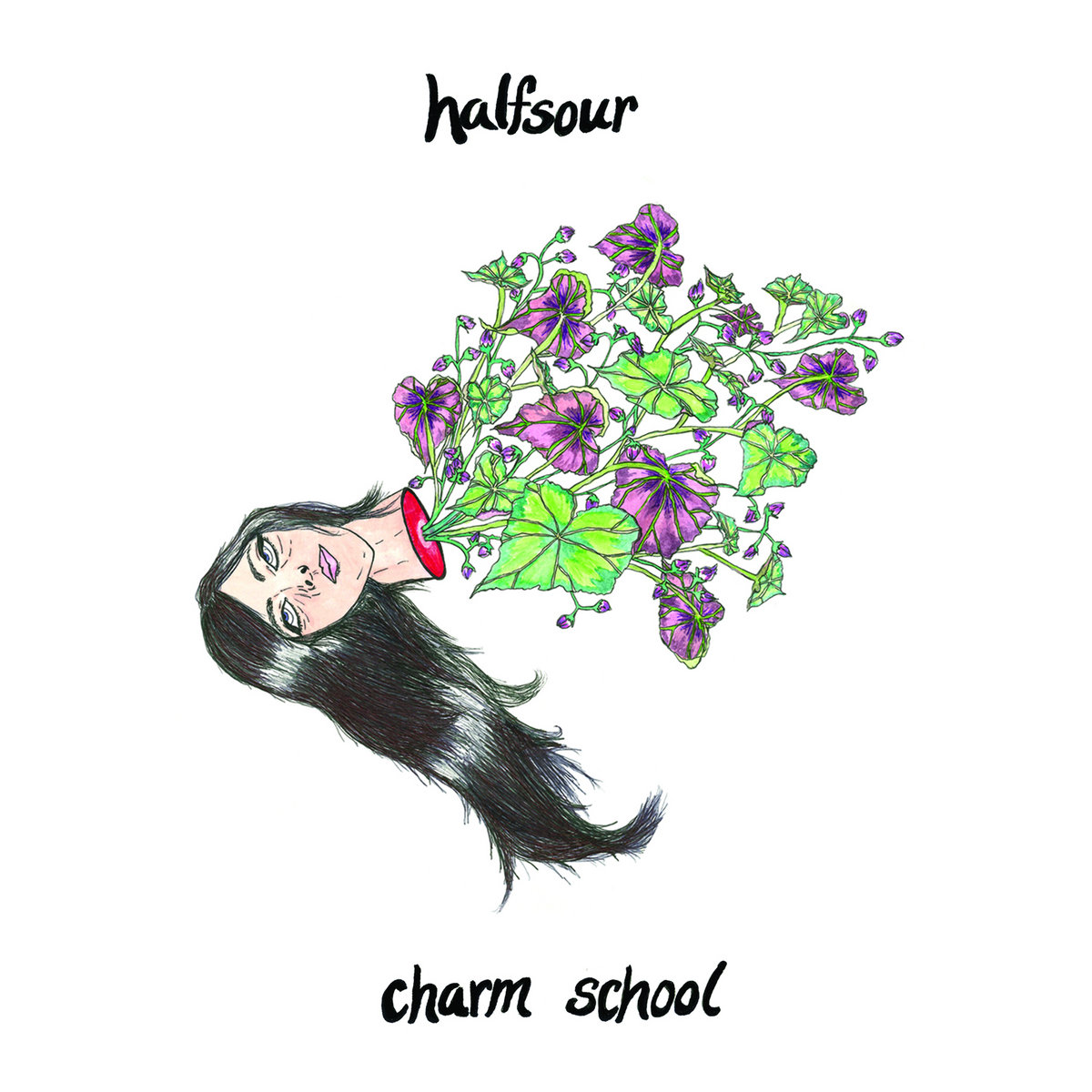 Boston's Halfsour creates power pop with punch and an uncompromising attitude.  There is a challenging note to the vocals and the drums are pummeled hard and high in the mix.  Really, everything is high in the mix, with the effect that you think you are standing right in front of the stage while Halfsour runs through a six song set.  In fact, the six songs are on Charm School, an EP that follows their excellent LP release from earlier this year, Tuesday Night Live.  So the bad news it that the band aren't live and in front of you.  The good news is that you can own this EP and play it any time -- yes, even when you aren't wearing any pants.

All six songs are keepers (one of the wonderful things about EPs, I think), but you'll likely be sold on the set after listening to the first and second tracks, "Ten Year Tenure" and "Vinyl Siding".  The following "Scenes From A Coach" sounds like the sort of song that becomes a fan favorite with every aware person in the audience singing along.  Track five, "Ice Cream Dinner", is the first song in the set that slows the tempo and lets that band display a bit of nuance.  But even on this one, the guitar fizzes and crackles and the band goes loud on the chorus.  Face it folks, these kids like to rock, and they do it well.

With Charm School, Halfsour has twice proved in 2016 to be a fresh and worthy set of faces on the indie rock scene.  You need no more evidence, get the EP.

Charm School is available in digital, vinyl and cassette formats.  See the Bandcamp link below.

"We Are Magic" by Red Sleeping Beauty

Last year Sweden's Red Sleeping Beauty roused themselves from a two-decade slumber to create the 2016 release Kristina, which is one of the best electro pop albums we've heard this year.  They have given us yet another reason to remember them with the just released single "We Are Magic".  Lush, sweet, and built for the dance floor, it is a special tune.  Enjoy below.

"Guards Down" by Dag

Dag are a Melbourne guitar band we think will soon make a big splash.  We featured one of their songs recently, but we now have "Guards Down", a single available for digital download.  And it comes with a video for your complete, 360 degrees pleasure.  As an added bonus, Heidi Cutlack performs background vocals.  Dag's debut LP, Benefits of Solitude, will be released on February 24 via Bedroom Suck Records and Omnian Music Group.

New music from Helsinki's Love Sport is early Christmas here at WYMA world headquarters.  The A-side is "Meat Moon", which may have you wondering whether Helsinki is now in California.  It isn't by the way -- we had our one partially sober intern look into it and three hours later he announced with 80% confidence that Helsinki was still in Finland (he's a keeper, that boy).  But the vibe is definitely Cool Ghouls plays Guided By Voices and The Feelies to our ears, which makes us happy all day.  The B-side is "Mary, Gary, warehouse", a jangling, country-tinged garage rock romp. 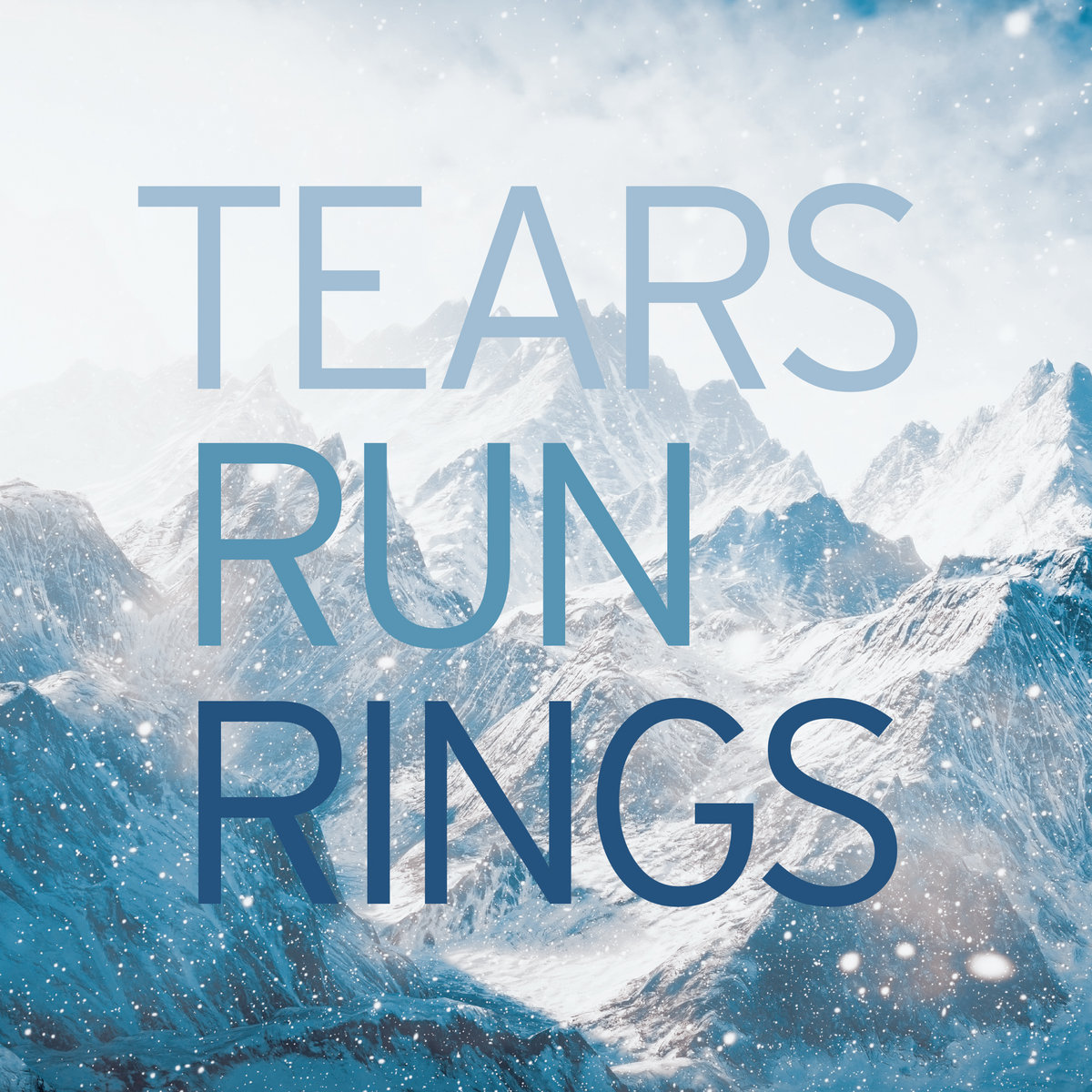 The winter months bring an increased density.  The clouds overhead are thicker, darker and appear weightier.  The moisture from the sky often is solid.  Even the seasonal food tends to be more substantial.  And for some psychological reason, my taste in music shifts to crave more sonic density, as well.  With perfect timing, West Coast band Tears Run Rings have delivered just what the season demands:  In Surges, a ten-song shoegaze and dreampop album of remarkable quality and consistency.  The arrangements are lush, full, and wide scope.  But the magic here is the band's infusion of delicacy and sweetness.

The album opens with the moody, staticy, mid-tempo "Happiness 6".  In the following "Belly Up" Tears Run Rings spread their melodic shoegaze wings with soaring melodies and layered vocals.  The band's dreampop craftsmanship is showcased on "Things Have Changed", which is likely to be a favorite among most listeners.  "Parts of Glass" is jangling, moody haze dissolving to sunshine.  "Green Lakes" presents ethereal tension and a sense of mystery.  Dreampop and shoegaze meld into a perfect hazy bliss with angelic vocals on "Broken".  "Destroyer" shimmers and sparkles, leading to the rocking, Ride-like shoegaze of "Something You Can't Hide".  The album relaxes into jangling dreampop with "Sine Wave Sleep", and then ends with a "Happiness 7" -- a sweeping soundscape.  Varied, detailed and beautifully executed, In Surges may be the shoegaze LP of the year.  Sample below, and stream the entire album at the Bandacmp link.

Tears Run Rings are Dwayne Palasek (drums), Ed Mazzucco (guitar), Laura Watling (vocals/bass), and Matthew Bice (vocals/guitar).  The four members reside variously in Portland, San Francisco, and Los Angeles, which results in the members writing and sending their contributions via the internet to other members.  From time to time, they converge and record, but as In Surges was under construction for six years, you'll have plenty of time to digest it before you hear a follow up.  The band's past recordings include two LPs (most recently, the well received Distance) and one EP.

In Surges is out now on vinyl and digital formats via North Carolina's Deep Space Recordings.

Melbourne's Hollow Everdaze creates appealing psychedelic pop.  Nods to the '60s are evident, but the band's interpretation doesn't seem the least bit dated.  Check it out with the melodic haze of "Still Ticking", taken from their upcoming LP Cartoon.

Not all good things last forever.  Recently, beloved Anglo/Aussie indie pop band Allo Darlin' announced that they were closing up shop.  But they are too nice to just drop the mic and leave the room without a kiss goodbye.  That kiss to their fans now is here via the single "Hymn On The 45" b/w "Wanderlust".  And as goodbye kisses go, this is the type to feature at the end of a grand scale romantic drama.  Or if you prefer to dwell in the more personal, the kiss from your year-long college sweetheart when separating for the summer, with warm, young-love memories and hopes for the future.

Allo Darlin' has always been adept at combining melancholy and sunshine, romanticism and steely realism, emotional weight and devil-may-care attitudes, a longing for home and wanderlust.  And this final record finds them in absolute top form doing what they do best.  As always, the tone and phrasing of Elizabeth Morris' vocals star, and on the A-track in particular Paul Rain's guitar work shines.  "Hymn On The 45" speaks to starting out in a new city, while "Wanderlust" addresses missing people and places while striking out for new adventures.  This is a perfect slice of indie pop to end the year and end the recording career of an excellent band, the appreciation of which will only grow over the coming years.  Are you ready for your goodbye kiss?

"Hymn On The 45" b/w "Wanderlust" is out now via Fortuna POP!  The gold 7" vinyl is only available at the few shows the band are playing in the UK, but the record is available in digital format via the Bandcamp link below.