What a great debut album this is!  This self-titled debut from Chicago's Dehd offers surf pop, psychedelia, and other tasty lo-fi treats.  The trio is Jason Balla (also in Earring), Emily Kempf, and Eric McGrady, and they recently signed to Brooklyn's Fire Talk Records.  Boy/girl vocals, big drums high in the mix, surf guitars, simple arrangements and nice up-tempo melodies -- it is as if Beat Happening invaded the bodies of Melbourne's Twerps.  This is one of my new, favorite bands.  Check out the wonderful "Sunburn" below, and then stream the entire album.  The digital version is a steal  at a mere $5.  This is your bargain of the week, folks.

Website
Bandcamp for digital or cassette album
Fire Talk Records
Posted by Rocksteady74 (Scott) at 9/10/2016 No comments: Links to this post 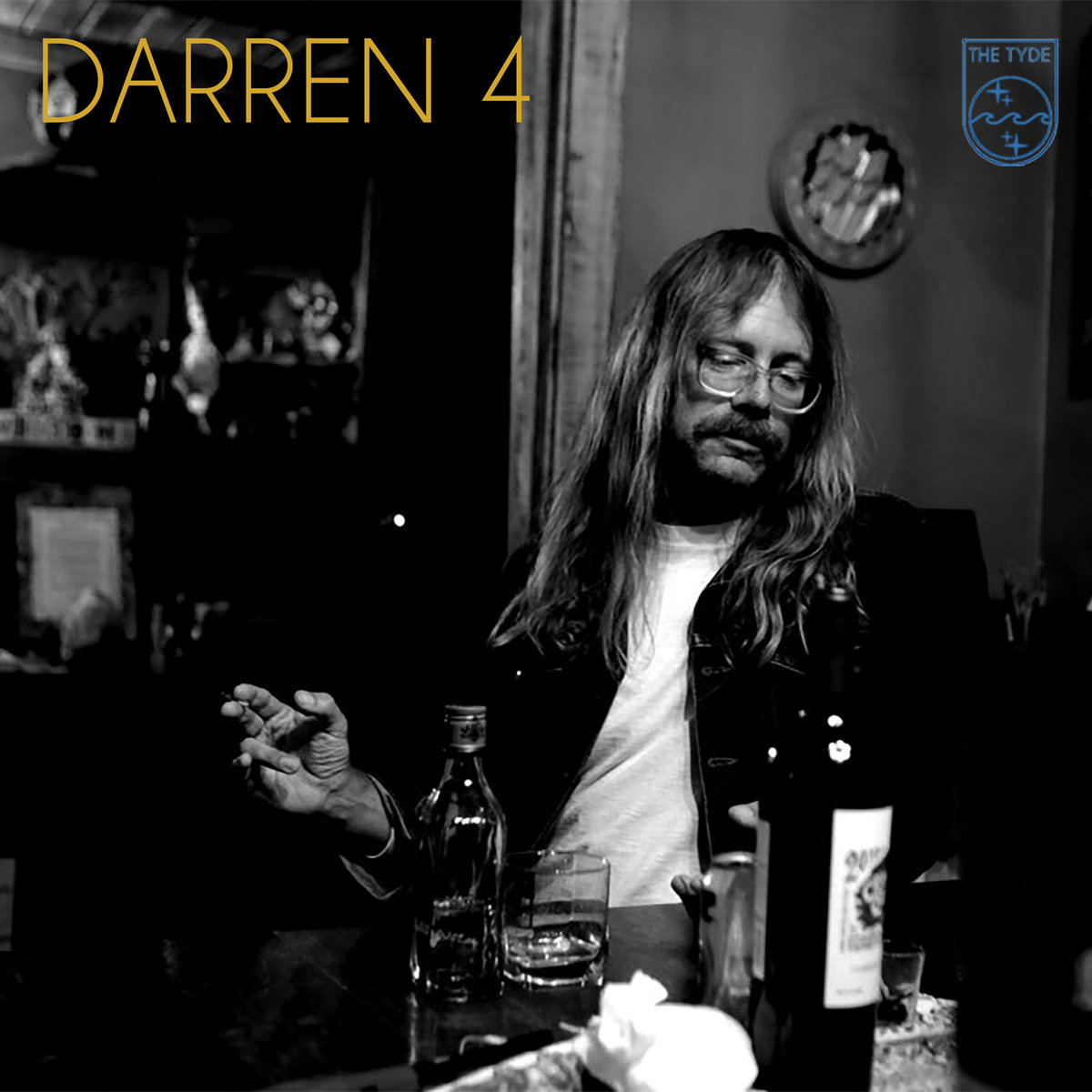 We had despaired of never having another record from The Tyde.  Perhaps Darren Rademaker, Mr. Tyde himself, had similar thoughts.  After all, the last record of original material -- and their third overall -- was released in 2006.  We haven't been completely without Rademaker, not only via the past albums but also via the fine compilation of the songs of California rockers Further, the Rademaker brothers' '90s project, courtesy of British label Bad Paintings (review here).  And fortunately for us, in addition to catching waves when the swells are good, Darren didn't stop writing songs.  So now we have album four from The Tyde: Darren 4.

The album begins with the upbeat tune "Nice To Know You", a friendly combination of '80s British guitar pop and California sunshine.  The following "Ode To The Islands" has an appropriately sunny, tropical vibe. Third in line is the flowing Laurel Canyon psychedelia of "The Rights".  The showpiece song of the album is "The Curse In Reverse", with co-vocals and guitar from former Suede guitarist Bernard Butler.  I think it will stand as one of the best ever songs under The Tyde banner.  The perfect follow up is offered by the California jangling country romp of "Rainbow Boogie".  The album ends with the reflective "Situations" and poignant "It's Not Gossip If It's True".

As compared to his work in the '90s and '00s, Darren 4 finds Rademaker older, and possessed of many additional life experiences -- and not all happy ones.  What hasn't changed is his ability to channel his thoughts and experiences into meaningful and entertaining music, and his innate feel for a pop song.  The result is an album that reflects the sunshine of summer, and the hints of decay that come with autumn.  I hope this album doesn't drop quietly, because it is a powerful, top quality record, and will stick with us long after many other releases are put back on the shelf.

In "Frisk", we have another synth pop gem from Black Marble (i.e. Chris Stewart and friends) in advance of the October 14 release of the new LP, It's Immaterial.  Warm, with a shading of mystery, it is a delightful listen.  We previously shared album track "Iron Lung" (link).  Play them back to back and you have a compelling case for eagerly anticipating this album.

It's Immaterial will be released by Ghostly International. 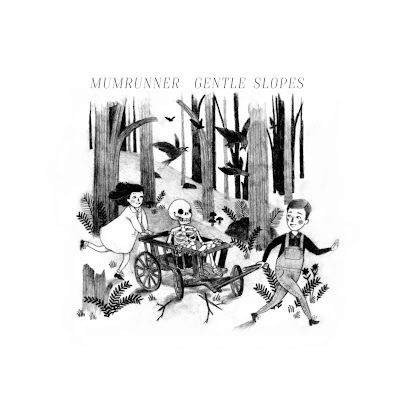 In our opinion, some of the most gorgeous guitar pop in the world over the past several years has been coming out of Finland.  The latest is the superb Gentle Slopes by Tampere, Finland's four-piece Mumrunner.  The five song EP, the band's sophomore EP, displays a muscular brand of dreampop and shoegaze with massive post punk rhythms and and upbeat tempos.  And then there are the guitars -- they jangle, chime, ring, grind and chug, with twin emphasis on urgency and melody.  The vocals are just high enough in the mix to be interesting, but never intrude on the instrumental fireworks.  Rare is the band that can create dense and intricate soundscapes while still delivering pop music satisfaction.  Mumrunner is such a rare band, and Gentle Slopes is a deeply satisfying example of their art.

Gentle Slopes will be released on Friday, September 9, in digital by Helsinki label Soliti.  Vinyl will be available via German label Wolves & Vibrancy Records.

Cherie Ko has been known to us for a number of years.  First as the ace guitarist and back-up vocalist for Singapore indie rock band Obedient Wives, then also as the synth-bubblegum popster of Pastelpower and the vocalist for transcontinental indie project Bored Spies.  But we didn't know the Cherie Ko that has emerged as the frontwoman for Tomgirl.  A collaboration between Singapore-based Ko and talented Melbourne producer and multi-instrumentalist Ted Dore, Tomgirl creates stylish pop noir with a cinematic sheen.  Sexy, tough, and loaded with bad boy/bad girl appeal, their new self titled debut races through ten tracks that leave a great taste that you will leave you wanting more. With Dore providing thumping but adeptly dynamic production, images that recall retro guys and dolls with guns story lines, Ko steps forward as a pop star and Tomgirl emerges as one of our new favorite pop bands.

Tomgirl is available in vinyl and digital formats via Deer Island Records.

We first featured Glasgow singer songwriter Ali Robertson in February of this year (link).  It has been a long wait, but we have another track confirming Ali's talent for intricate but understated pop gems. Scott & Charlene's Wedding plays garage rock just the way we like it -- long on enthusiasm with a shambling approach to precision.  But don't dismiss this band as just a bunch of bangers.  Beneath that garage rock fuzz and jangle there is a solid vein of the Velvet Underground, The Fall, The Lemmonheads, and Television.  Moreover, frontman Craig Dermody's casual attitude towards singing in key and conversational lyrics belies focused and adept songwriting.  S&CW's previous album, Any Port In A Storm, relayed Craig's experiences living in New York City in highly entertaining fashion.  In the band's new album, Mid Thirties Single Scene,  Craig tackles the romantic detritus of a mid thirties indie rock frontman and sometimes blue collar worker.  There are observations about daily life -- making eggs for breakfast, watching TV, hanging out in the bar, being jobless -- interspersed with regrets and reminisces about relationships that didn't last.

The album kicks off with "Maureen", which will stoke VU comparisons.  The following "Don't Bother Me" is a chugging, garage sing-along, and definitely an album highlight.  "Hardest Year" and the closer, "Forever And A Day" together comprise ten minutes of the album's running time, and give the band a chance to display their ability to dial it down for an affecting slow tempo song.   "Scrambled Eggs" is a self-deprecating view of a drifting life, while "End of the Story" steps out to rock hard.  In contrast, "Distracted" and "Delivered" quite simply should burnish the band's reputation as the garage rock voice of their generation.  The band is top quality at every position and gives every track a rumbling, crackling live vibe.

Now back in Melbourne, Craig's mates for this outing include Jack Farley, Joe Alexander, Gill Tucker, and Esther Edquist.  The album is out via Bedroom Suck Records in the Southern Hemisphere, and Fire Records in the rest of the world.

This is one of my personal favorites of the year so far.

"Messina" is our moody beginning to the week.  The song is taken from Sketches, by London songwriter Joe Mirza recording as The Slow Revolt.  Joe's music is restrained, layered pop with a strong current of emotion.  I think that "Messina" is the strongest of the three songs on the EP, but all of them offer them are worthy of your time.  Both "Messina" and Sketches are available for 'name your price' at the Bandcamp links provided below.