Martha - Blisters In The Pit Of My Heart

Martha manages to be many things at once, or one after the other. They are pop punk, indie rock, power pop, post punk, and noise pop.  They are political, socially conscious, reflective, romantic, mischievous, and cynical.  They are literate and rough-edged.  They usually are loud and fast, but can be soft.  But in any mode the UK four-piece is an excellent band, and Blisters In The Pit Of My Heart is an incredibly good album.  Spiky riffs trade the limelight with pop hooks, while the energy is at fitness video levels.  Billy Bragg spoke of the fusion of pop and politics, but for the set that wants to dance with their principles, Martha should be their go-to act.

I love songwriting that works both as a superb soundtrack and, for those that want to dig deeper, wonderfully twisted entertainment.  "St Paul's (Westerberg Comprehensive)" focuses on gay students in a Catholic school, but adds references to Paul Westerberg of The Replacements, whose "Androgynous" was the inspiration for this song.  Famous revolutionary makes an appearance, but she is re-imagined as a gumshoe in "Goldman's Detective Agency".  Another song discusses fining romance in the supermarket.  There is plenty more there, but I shouldn't deny you the fun of discovering it for yourself.  And for those inclined to look, the Bandcamp link below includes the lyrics (which I think all bands should do).  Suffice it to say that the album is about life and how to deal with it, roll with it, and persevere.  An album this good deserves your ears, and your ears and heart deserve it.

Formed four years ago, Martha are Nathan Stephens-Griffin (drums), Naomi Griffin (bass), JC Cairns (guitar), and Daniel Ellis (guitar), all of whom write and sing.  Blisters In The Pit Of My Heart is out now in digital, CD and vinyl formats via Fortuna POP! in the UK/Europe and Dirtnap Records in North America. 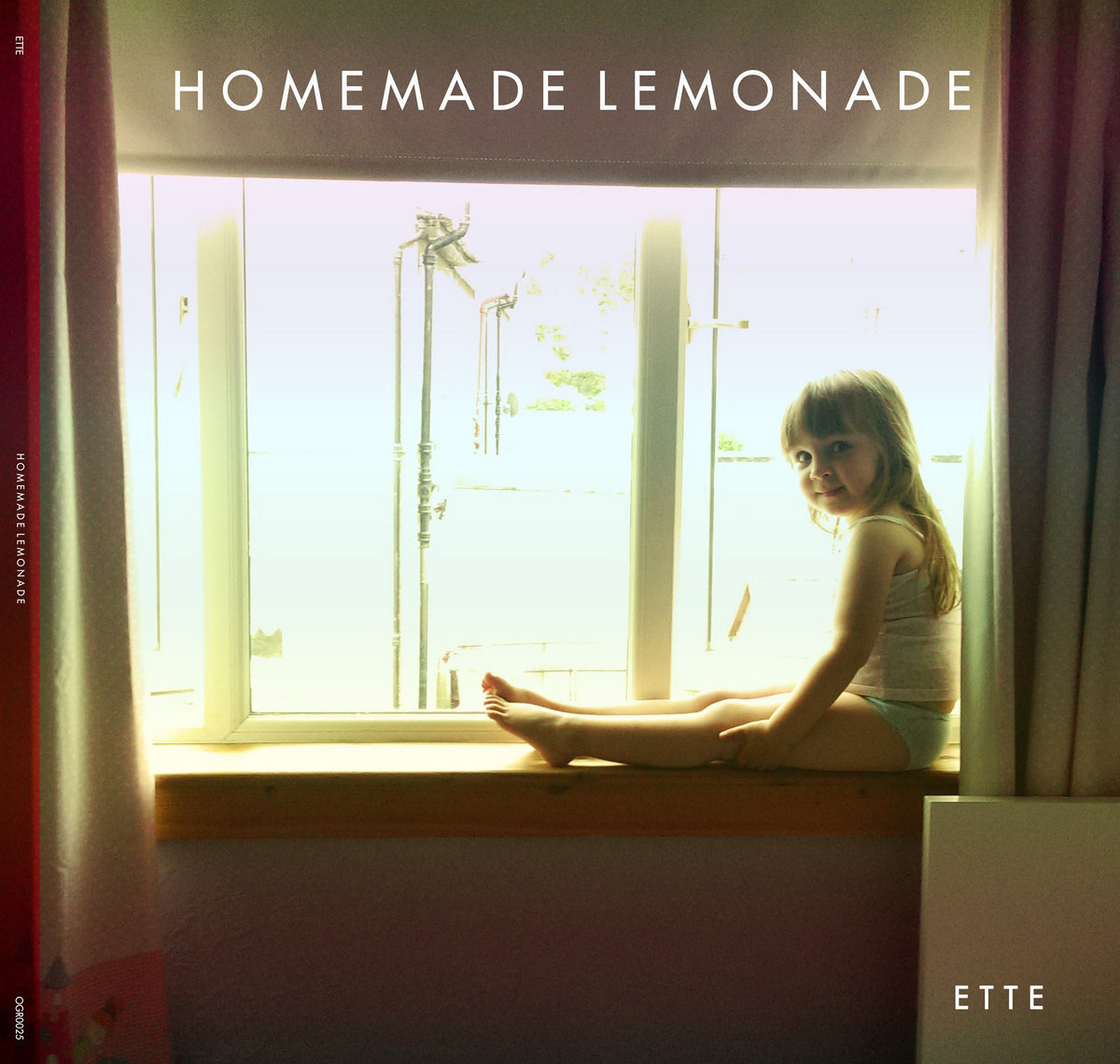 Summertime is the right time for lemonade.  No, not the chemically flavored stuff from the store.  We're talking about homemade lemonade, made just before drinking with fresh lemons, good water and cane sugar (I suspect my neighbor, Ned, also pours some other colorless liquid in his homemade lemonade, but who am I to judge a man afflicted with such poor balance and bouts of random mumbling).  So we are here to tell you of a marvelous new invention, a homemade lemonade for your ears -- after all, why should your taste buds have all the fun?  Yes, today we announce the introduction of Homemade Lemonade, by Scottish pop band Ette.  A delicious brew concocted by Carla Easton (also of TeenCanteen) and Joe Kane (of Dr. Cosmo's Tape Lab), it's major physical ingredients are Carla's '60s bubblegum vocal style (the band's name comes from the common suffix on the name of many '60s girl groups) and Joe's synth-psychedelic production.  The result was recorded in a couple of days with two additional musicians, and takes the Brill Building/Wall of Sound aesthetic and twists it delightfully while transporting it to the modern age.  If you want sweet sound with a deep grove to make you happy, this is your musical beverage for the summer.

Homemade Lemonade is out now via Glasgow's Olive Grove Records.  See the Bandcamp link below.

Treehouse - Centre of Their World 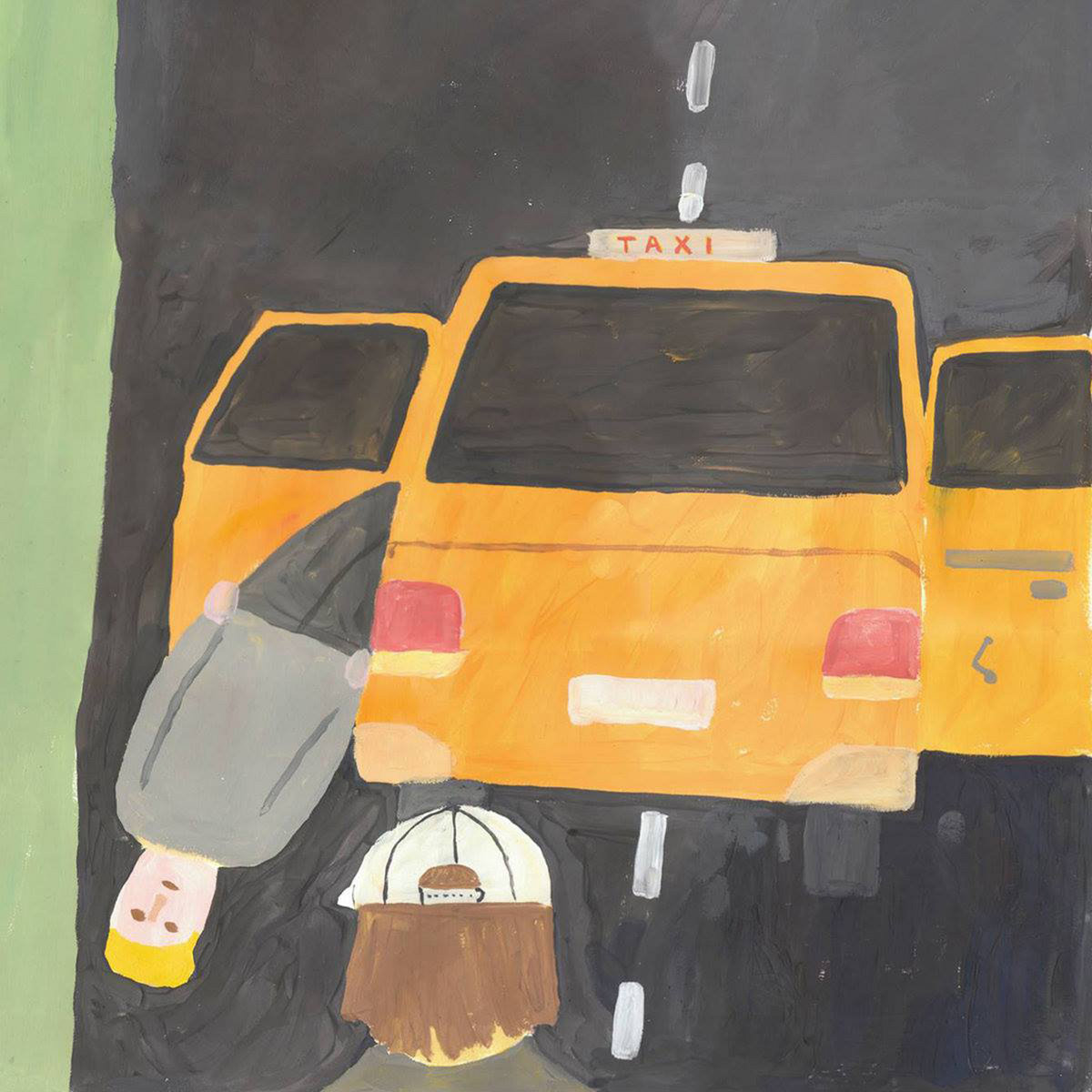 Treehouse is a rumbling, jangling pop punk band from Hobart, that first appeared on these pages a few years ago when we featured their Interzone album.  The trio is Cal, Jon and Will, and they raise a righteous noise.  The band's latest album is Centre of Their World, released by the excellent Vacant Valley label.  The seven tracks confirm that rock isn't dead, hasn't totally been taken over by corporations and hired computer drones, and isn't even stale or trite.  Of course, in order for there to be a silver lining, the rules say there has to be a cloud.  And the cloud here is that Centre of Their World is a cassette release, and the Bandcamp page says it is sold out.  I can't do anything about that, but I suggest you listen to the clips here, and then stream the album on Bandcamp (my favorites are "Slave" and "Stop the Ocean").  Then follow Vacant Valley on social media so when their next nugget is released you don't miss out.  And maybe if you beg label boss Peter sweetly enough he can find a way to sell digital versions of the album.

"Could Be You" by Allah-Las

We have very few rules around WYMA headquarters, but one is that the release of new music from Los Angeles' Allah-Las is a holiday.  That "Could Be You", the new song from the upcoming LP Calico Review happens to drop during a week when Seattle is sunny and warm is just a lucky coincidence.  The track is a warm slice of garage rock focused on the band's home city.  Here it is in video format. 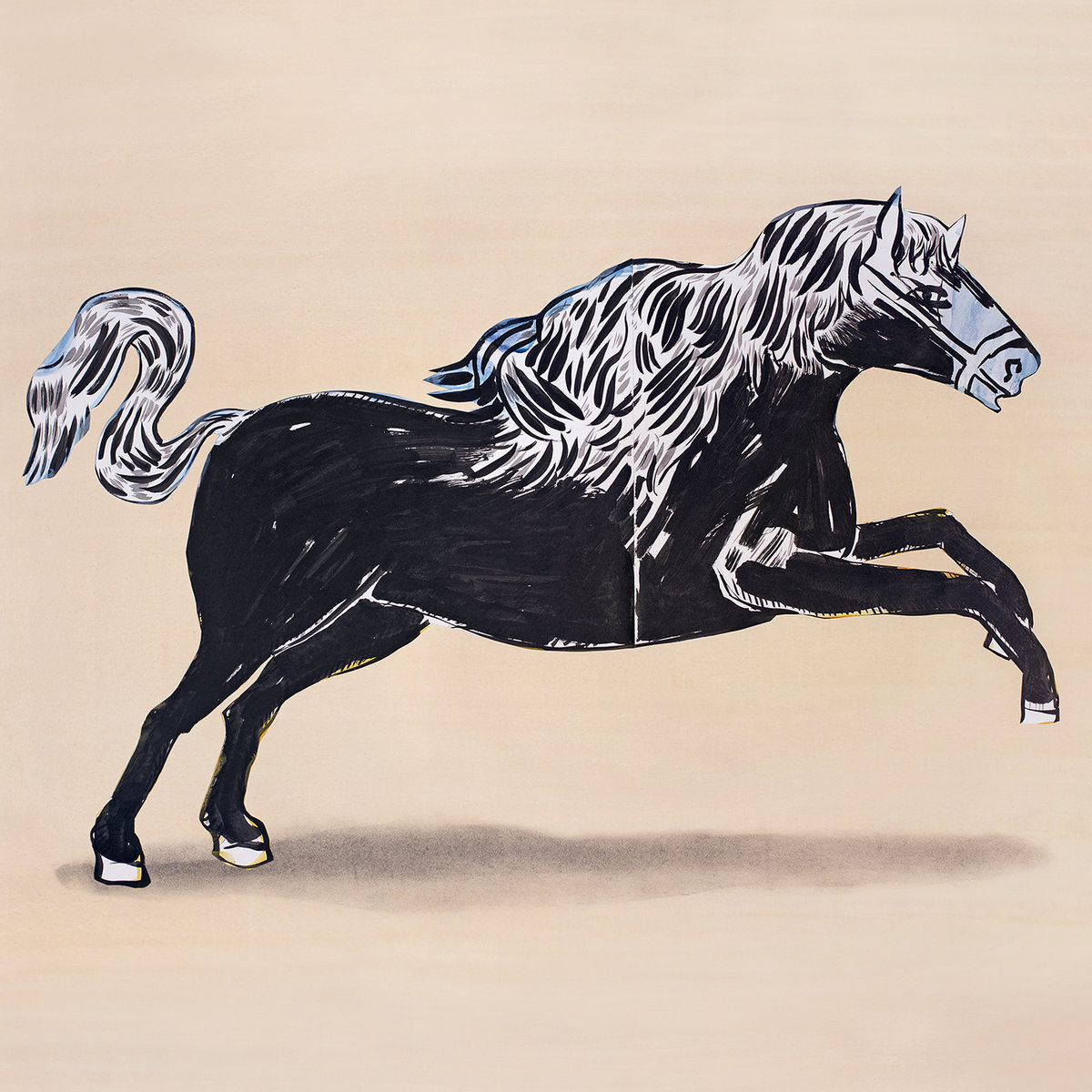 Look Now You Are Cursed sends a sweet arrow to my musical bullseye.  The product of Sydney four-piece Community Radio, it features 11 tracks of sunny, literate, jangling guitar pop with distinct echoes of New Zealand's The Bats.  The harmonies are sweet, and the hooks and melodies bury themselves pleasantly in your brain.  This is a perfect album for a summer afternoon in the back yard.

Community Radio are Cameron Emerson-Elliott, Malcolm McKernan, Jen Kevin, Patrick Mathews.  Look Now You're Cursed is available now on CD, vinyl and digital formats from two separate Bandcamp links, the band's (for CD and digital) and Madrid's Tenorio Cotobade (for vinyl), which I've provided at the bottom of the post.

Sex Schön, Guido Minisky, Hervé Carvalho, and Kenzy Bourras are Acid Arab, four musicians that combine western electronic music with North African and Middle Eastern influences.  Minsky and Carvalho founded the band in 2012, and are based in France.  They are signed to Belgian label Crammed Discs, which will release their LP, Musique de France, on October 7.  Here is "Buzq Blues", the first single.  We think this album is going to be very good. 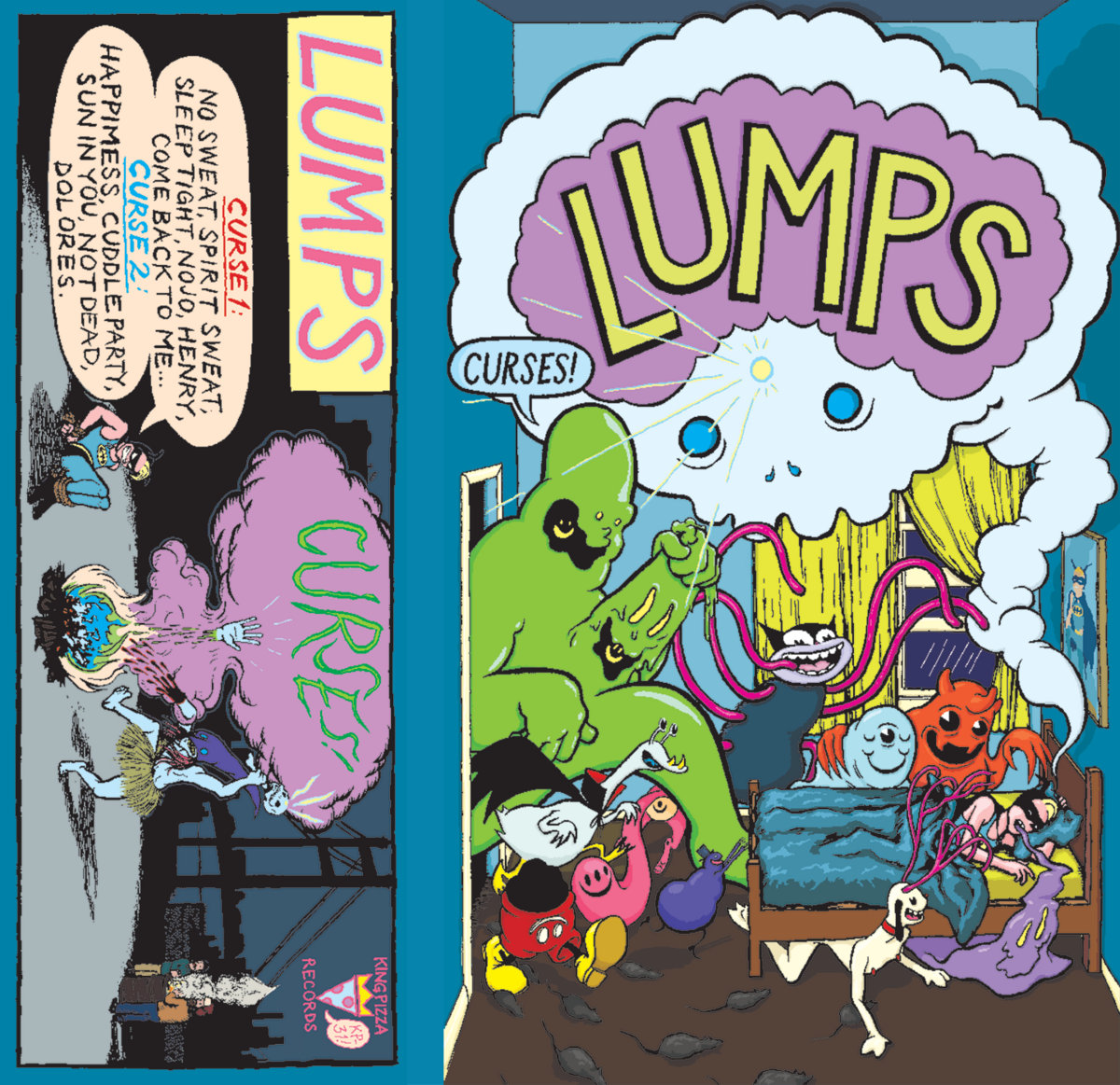 Cue up Curses!, the new LP from New York's Lumps and you'll be blasted by three sweat-soaked, punk pop tunes of considerable quality.  How sweat-soaked?  Well, the word "sweat" even appears in the title of the first two songs.  We're talking puddles on the floor while you pogo like an maniac.  Then "Nojo" takes us to a place I haven't been since the last time I listened to the Monks' Black Monk Time.  And for the benefit of you children who have never experienced the Monks, that is a very good place to be.  "HENRY" follows with a wonderfully skanky retro jam that belongs at a midnight surf party.  "Come Back To Me" is a smashing garage pop tune with some rockabilly touches.  The next five songs continue the jazzy, beat-oriented adrenaline rush.  Highlights for me include the retro/new wave "Cuddly Party" and "Not Dead".  And any descriptions need to be taken with a grain of salt, because Lumps like to change things up a few times in a song.

These guys take the spirit of early punk and take it places, and add influences and genres, that you wouldn't expect --  which of course is the most punk act of all.  These guys are a blast of fresh air, albeit fresh air in a sweaty basement with beer on the floor.

Lumps are Aaron Hester, Ara Arnn, Rory Fortune, Sam Backer, Nick Carter, and Joe Wilson.  Curses! is an absolute bargain at $5 for a digital download of 11 tracks at the Bandcamp link below.

"Tallows" and "Mexico" by Sun Sap

In the mood for chill summer tunes with a good groove?  Of course you are.  So here are "Tallows" and "Mexico" by Sydney's Sun Sap.  Sun kissed, psychedelic garage pop for your pleasure at a 'name your price' via the band's Bandcamp page.  Their debut album will be released later this year.

Terry HQ, by Melbourne's Terry, reveals a band capable of jangling with the jangle poppers, rocking with the post punkers and dishing attitude with the punks.  And there are a few slacker pop ballads as well.  But for a band assembled by by two couples, who variously are members of Dick Diver, UV Race, Eastlink, Total Control, School of Radiant Living, Constant Mongrel, Russell Street Bombings, and Mick Harvey's band, talent and vision shouldn't be a surprise.  The four-piece, consisting of Al Monfort, Amy Hill, Zephyr Pavey, and Xanthe Waite, share songwriting and vocal duties, resulting in a range of styles and tempos.  But all the tracks share a sharp focus, incisive writing and a forward-pushing delivery.  The band doesn't shy away from social criticism (e.g. "Third War"), but makes sure to provide some laughs as well.  The approach is decidedly lo-fi, and there nothing about the album could be termed slick.  But the approach fits the surging, rhythmic arrangements like a glove.

Australia seems to produce great guitar bands like Munich produces beer (and we wouldn't want to live without either), and Terry is a worthy addition to the roster.  Get on the Terry train before it leaves the station!  Terry HQ is out now via Upset The Rhythm in digital, CD and vinyl formats.

Terry's Bandcamp page (two previous EPs)
Upset The Rhythm
Posted by Rocksteady74 (Scott) at 7/18/2016 No comments: Links to this post

Heliotropes - Over There That Way 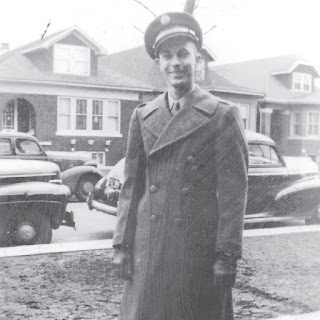 Over There That Way is the second album from Heliotropes, although it seems more like a first album because only frontwoman Jessica Numsuwankijkul is on both records.  Where the debut featured big, grungy guitar sounds, Over There That Way shifts to more straightforward guitar pop.  To my ears, the new approach is brilliantly executed.  Jessica's vocals has a pristine tone and confident delivery that commands your attention.  At times there is a hint of the '60s, but not enough to slot the album into a retro channel.  And there is plenty of breadth, with the dark folk rock of the title track, buzzing post punk on "Dardanelles Part I", sunny indie pop on "My Only Friend" and woozy dream pop on "Dardanelles Part II".  The band is tight and supports Jessica's vocal perfectly, but is ready, willing and able to rock to the rafters when the opportunity presents itself, such as on "War Isn't Over".

Over the course of ten songs, the band never puts a wrong foot forward.  The songs are well written and executed with complete confidence.  There is a special vibe to the music when the band knows they are good, and this album has it.  And by the way, Heliotropes, I love, just love, the sax solo in "Wherever You Live".

For Over There That Way the band, in addition to Numsuwankijkul, is Ricci Swift, Richard Thomas, and Gregg Giuffre.  The album is out now on The End Records. 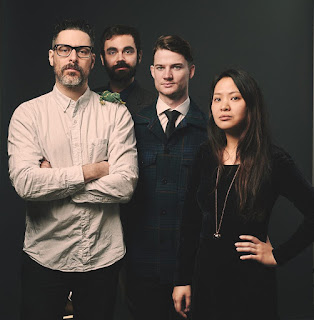