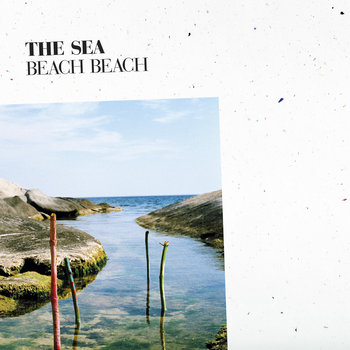 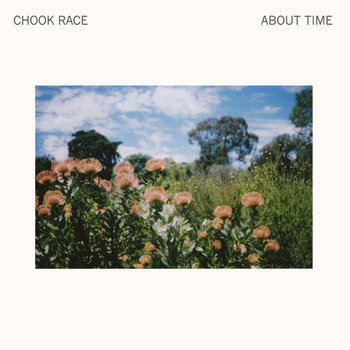 About Time from Melbourne's Chook Race delivers ten tracks of garage and power pop that, while it won't separate them from some of their notable peers on the hometown scene in terms of genre, should earn them a good look based on the quality.  There seems to be a bit of '60s garage feel to the guitars on many tracks, but there are surfy tunes ("Good For Me"), dusty California guitar pop ("Time"), jangle pop ("Outbound"), and note-perfect slacker pop.  You can stream the entire album at the Bandcamp link, but I've included a few of my favorites below.

Chook Race are Carolyn Hawkins (drums) Rob and Matt.  About Time is out now.  You can obtain a digital copy from Bandcamp.  Bandcamp also is your friend for vinyl in Australia, but US fans probably should use the link for Easter Bilby Records if they want vinyl.

Ben Cook of Toronto's Fucked Up possesses a restless muse.  In addition to his duties with the hardcore stars,  a few side projects, songwriting for various artists and an acting stint, he now has assumed the identity of Young Guv, a top 40 popster who throws down sweet and gooey tunes with infectious rhythms and hooks that will make your dentist smile.  The Guv's new album for Slumberland Records is Ripe 4 Luv, and it's eight tracks fuse power pop with a touch of glam and a dose of Princely swagger.  It is hard to pick favorites, but a few standouts are below.  I also suggest checking out "Aquarian", which is so smooth it should be in a shaving commercial.


Slumberland Records page for album
Posted by Rocksteady74 (Scott) at 3/11/2015 No comments: 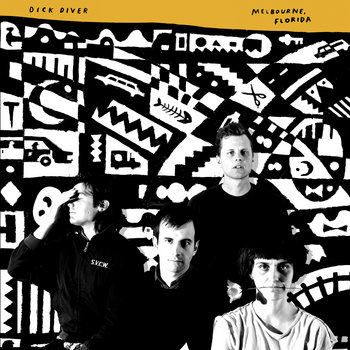 Melbourne, Florida, the third album from Melbourne, Australia's Dick Diver, is their first to be officially released in the United States.  However, they are not unknown here.  They toured last year and their prior work has attracted positive reviews (for example, here).  And I certainly qualify as a fan, as I rated their 2013 LP Calendar Days the top album of the year (link).  It seems that this release could present a challenge for the band, because fans naturally will compare the album to Calendar Days and new listeners will be listening to see whether the band can hit the marks necessary to make it in the crowded US market.  But if the band feels the pressure, it doesn't show.  What they have managed to do here is make an album that still sounds like Dick Diver, but pushes past their previous boundaries in triumphant fashion.

By way of introduction for the uninitiated, Dick Diver is a four-piece consisting of Al McKay (guitar), Rupert Edwards (guitar), Steph Hughes (drums) and Al Monfort (bass); all members write songs and sing.  The name of the band is taken from a character in F. Scott Fitzgerald's Tender Is The Night (although I suspect many confronted with the name for the first time assume something ruder).  They play guitar pop with themes that address the lives of young Australians, with poetically-phrased and often acerbic observations about various facets of life, presented in a style sufficiently reminiscent of The Go-Betweens to be endearing but in all ways that matter individual enough to be their own masters.  Their past records include upbeat and somewhat noisy indie rock and  slower paced songs with minimal instrumentation.  In my opinion their forays into rock have been wonderful, as "Calendar Days", "Lime Green Shirt" and "Bondi 98" from their 2013 LP illustrate.  But for me their real sweet spot is crafting the less noisy tunes.  In that space, they show a genius for using space, fewer notes and sparse lyrics to make a perhaps surprisingly big impact emotional impact.  As lyricists, they are ahead of most, but they also seem to know that the melancholy and mundane can be eloquently expressed with a phrase, a few pauses and a guitar strum.

On Melbourne, Florida, the band continues to create the type of songs on which they have made their reputation, but with more sonic range and, at times, even sharper songwriting.  They include rockers "Waste The Alphabet" and "Tearing The Posters Down", to which you can listen below, and wonderfully rich pop tunes such as "Year In Pictures", "Percentage Points" and "Private Number", all of which have a nostalgic '80s feel.  And of course there are those quietly lovely emotional grenades, such as divorce song "Boomer Class" (a current musical obsession of mine which can be streamed below) and "View From A Shakey Ladder".  Working again with producer Mikey Young and secluded in a sheep shearing shed along Apollo Bay, the fine songwriting is accented with piano, steel guitar, saxophone and trumpet.  To my ears this album makes better use of Steph's vocals to complement the male vocalists and as well as a lead, and the performances from all parties are assured.  Lyrically, the foursome still cast a sharp and melancholy glance at the world around them, but the boundaries seem more international and the scope seems to look nostalgically backwards and resignedly forward.

Melbourne, Florida is released today, March 10, by Trouble In Mind Records worldwide, except Australia, New Zealand and Japan, for which the release was handled by the band's home town label, Chapter Music, on March 6.  By now, you should take my word for it, but if you have any doubt about this album, you can stream it here.

When this calendar year commenced I had a list of albums I expected to evaluate for review.  Anthonie Tonnon's Successor was not one of them.  This isn't because I specifically rejected the notion of listening to his album.  Rather, it is because I had never heard of Tonnon, either as a single artist or in his previous projects Tono and Tono & the Finance Company.  However, I'm nothing if not flexible and it took but one listen to Successor to decide that it required repeated listens.  With a lyrical songwriting style that ranges from broadly observational to humorous to personal, and a knack for a good melody, Tonnon delivers nine fully formed and generous songs that defy neat characterization of influences.  If pressed, I'd say that there is a hint of '80s pop on a number of tracks, especially with the motorik beat and accenting guitar lines, and reminders of David Bowie at other points.  But "Bird Brains" is more Teenage Fanclub than David Bowie or or Krautrock and "Sugar In The Petrol Tank" and "A Friend from Argentina" remind me of the soaring folk pop of American band Beirut.  Overall, the effect is of wide-ranging ballads focused on communicating with the listener, ably delivered by Tonnon's expressive vocals.  Take Successor for a test drive with the fourth and fifth tracks below.

On Successor Tonnon is assisted by Jonathan Pearce, Stuart Harwood, and Eddie Castelow.  The album is out now via Canape King Records everywhere but the United States (I suggest using the Bandcamp link below), and will be out soon in the United States via Wild Kindness Records.

Ben Buist, Grant Irvine, Kieran Smith, and Rory Fleming-Stewart are Model Aeroplanes.  We are fond of their catchy guitar pop around WYMA headquarters, so we are happy to feature their latest -- "Club Low".  Don't be embarrassed to dance, that just might be the point here.  As far as we know, there is no LP or label yet.  But with songs like this, I expect both will happen soon for this band.

Dunedin, New Zealand musician Kane Strang is prepping his second LP, to be released later this year.  He has shared a second track, "Full Moon, Hungry Sun", and it is available as a 'name your price' download from Bandcamp.  I think it is a very nice song, with ringing guitars and a sturdy rhythm section.  Check it out below.