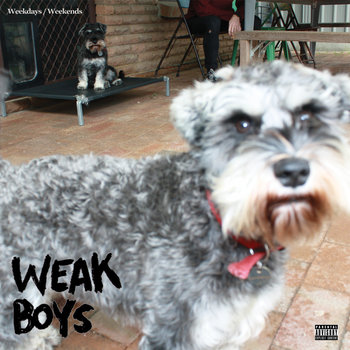 This post about Sydney's Weak Boys combines two of my passions: Finding emerging artists to bring to your attention and losing myself in good guitar pop.  Since I'm at the office I can't add my passion for drinking beer while listening to and writing about good guitar pop, but that will be remedied in a few hours.  I'll admit that I have no idea whether the three Weak Boys are physically deficient, but their musical abilities as on display on Weekdays/Weekends strongly hit my sweet spot.  The songs are charming, shaggy (generally, and in the case of "Dog Farm" and the cover art, literally), and unapologetically  focused on youthful issues such as hangovers, landlords, soon-to-be-broken vows to 'never drink again', and tributes to desirable women (specifically Diane Keaton and Julia Wilson of Australian label Rice Is Nice).  The self-aware and observational approach reveals a musical kinship with other Australian bands such as Dick Diver, Twerps and The Ocean Party.  But Weak Boys put their own spin on it with an approach that suggests a bit more substance ingestion and an unserious perspective on matters large and small.  A number of the tracks have an infectious sing-along appeal that would work to great effect in your local pub, or around a bonfire.  They probably would be especially awesome around a bonfire in your local pub, but don't attribute that suggestion to us as our liability reserve was exhausted after a python-go-seek contest suggestion we made last year (and a shout out to Rodney, the contest winner, who we've learned is eating solid food again).

In my opinion, you are unlikely to find a guitar band that penned a more infectious set of songs this year.  Consider that the ten tracks will likely include your favorite songs about hangovers and dogs, and most certainly the best song you'll hear about Diane Keaton.  And to think that a few minutes ago you probably didn't know there was a song about Diane Keaton.  I'll be including this album on my end of the year list, give it a listen.

Weak Boys are Chris Yates, Craig Lyons and Matt Banham.  Weekdays/Weekends is available now via Strong Look Records.  You can source a digital copy at the Bandcamp link below.

Mitski - Bury Me at Make Out Creek 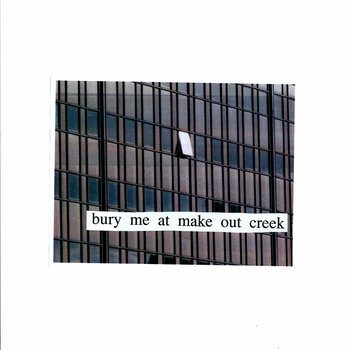 Mitski is SUNY-Purchase grad Mitski Miyawaki, and I suggest that you get to know her music.  Fierce, sincere, personal, observational, with soaring and crunching guitars, her November release Bury Me at Make Out Creek has flown under the radar, and we would like to do our part in remedying that.

The lyrics are clever, the theme follows the cycle of a relationship from first spark to literal dying sigh, and the musical parchment on which it is written throbs and shreds, hooks and glides.  You can stream the entire album below.  It is available in digital form at the Bandcamp link below, where you also can find her previous albums.

"For", from C Duncan

Young Glaswegian C Duncan is the latest Scottish musician to sign with Brighton's FatCat, and will be releasing his first album for the label in 2015.  But you don't need to wait to discover his charming compositional and performing skills.  Last week he made the two track single For available for free download.  Christopher has a timeless style, and an ability to make direct, but intricate arrangements.  You may have difficulty pinning down the influences: '60s pop; orchestral folk; Sufjan Stevens; Fleet Foxes?  I submit that it really doesn't matter -- the music transports you to its own world, and you'll likely find it delightful.

Duncan is son of two classical musicians, and has earned a degree from the Royal Conservatoire of Scotland.  He also is a visual artist, and created the cover art for the single.  Download For at the Soundcloud link below.

Heal should be Timothy Showalter's coming out party.  Not that the main man of Strand of Oaks is the kind of guy to be a debutant.  But the manner in which he takes the alienation, anger, rebellion and insecurities of his Hoosier adolescence, and leavens it with a growing maturity and the experience of a nearly deadly car crash in December 2013 transcends his previous work and stands in select company when considering American rock albums released in 2014.  By addressing and weaving the strands of where he was and where he is today, Showalter has crafted vivid pictures of life, complete with anger, confusion, understanding and acceptance.  And if the emotions seem contradictory, consider that for most of us, such contradictions describe life as we know it.

Of course, some songs will work better for you than others.  But the entire set is strong, and there is a reason that several of the top DJs at influential KEXP included Heal among their top ten albums of the year.  If you hear what I hear, you'll note influences such as Built to Spill, and Neil Young.  I've included a few of my favorites below, including "JM", in which Showalter discusses the importance of Jason Molina's music to his life.  Heal is out now on the Dead Oceans label.

Thigh Master - Head of The Witch 7" 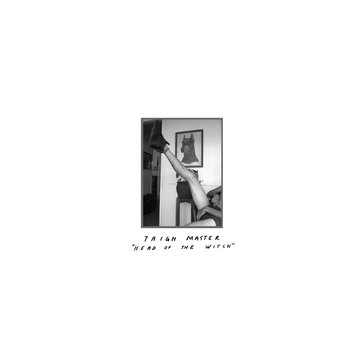 Meet Brisbane's Thigh Master.  They make no claims that this album will tone or reduce the size of your lower extremities.  But you may want to dance, or at least jump in place, so there is likely to be some physical reward.  The music is a delightful meld of dirty garage rock and antipodean jangle.  The three track Head of the Witch 7" is out now, and we've included a link to previous recordings.

The Brisbane based band consists of Matthew Ford, Patrick Bryon, Daniel Ford, and Dusty Anastassiou.  In the past James Cassidy stood in on bass when Ford was unavailable; in the future, the substitute bass duties will fall to Hayden Night.

Facebook
Bandcamp for this release
Bandcamp for prior releases
Posted by Rocksteady74 (Scott) at 12/28/2014 No comments: