Some of you looked at the title of this post and thought to yourself "hmm, Withered Hand, eh, this is either going to be some thrash metal group or some weepy emo stuff - has Scott run short of material?'  However, the truth is that Withered Hand, the performing name for Edinburgh's Dan Willson, is neither, and New Gods is an album that you really should consider owning.  Now.

Prior offerings from Withered Hand have tended to attract terms such as anti-folk.   But on New Gods Willson and his band of contributors have emerged as an energetic, melodically clever pop band, merging the lyrical talents of a first class folk storyteller with clear-eyed observational skills with the the pace, tone and melodies of pop.  There is wit, self-effacement, joy, loss, cries of the wounded loser, and tales of travels in America set over a Byrdsian jangle and Shins-level hooks.  And I have to give extra points to a man who scores a deal with Slumberland Records for an album with a song named after the label boss' own band (Black Tambourine) and featuring that band's lead singer, Pam Berry, on the track.  And Pam isn't the only notable to assist Willson with New Gods.  He also received contributions from Eugene Kelly (The Vaselines, among other projects), King Creosote, Scott Hutchison of Frightened Rabbit and members of Belle and Sebastian.  The production is by the highly regarded Tony Doogan, whose other clients include Belle and Sebastian, The Delgados, Mogwai and Teenage Fanclub.

The album opens with the incredibly appealing "Horseshoe".  I think it is one of the songs of the year, and since it is Willson's favorite of the set, I'll credit myself with good taste.  The following track, the above-mentioned "Black Tambourine" is buoyant, sugary indie pop of the first order.  At this point of my first run through the album, the thought occurred to me that this music was generating the same same sort of excitement in me as did James Mercer's first few albums as The Shins.  The third song is the America-shaded "Love Over Desire", about the classic (and never-ending) struggle between love and desire.  Then Withered Hand launches into rock mode with the fast-pace "King of Hollywood", a song that always makes me want to climb into a car and drive with the song on loud and the windows down.

The pace and volume finally slow for the reflective and dreamy "California".  "Fall Apart" and "Between Love and Ruin" are note-perfect California guitar pop.  Country rock shoulders back into the set with "Live of Doubt".  The final three tracks, "New Gods", "Heart Heart and "Not Alone" take the listener on a bracing ride of reflection, joy and togetherness that quite appropriately has the feel of a well-deserved encore.

I suspect that you won't find many better indie rock albums this year; I know that I won't.

New Gods is out now via Slumberland Records in North America and FortunaPOP! in the UK/EU.

Based in Glasgow, Tijuana Bibles aim to satisfy your craving for head bobbing, fist pumping rock and roll.  The lineup is Tony Costello, Behn Cross, Mikey Dornan, and James Brannigan. Their first EP, Wild River, was released last April, and their second EP is expected this June.  On March 14, they will release "Toledo".  Download it free here.

Here is the Wild River EP: 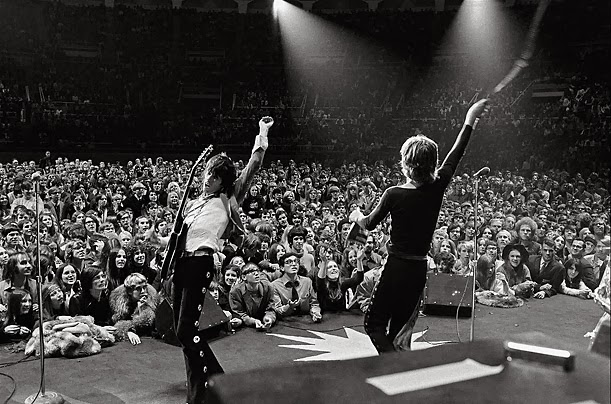 The opening track on Let It Bleed, "Gimme Shelter" is undoubtably one on the Rolling Stones most powerful and best songs.  Raging with anger, alienation and violence of the Vietnam War, "Gimme Shelter", recorded in November 1969, effectively closed the 1960's and still serves as one of the truly emblematic cultural pieces of that era.


While Brian Jones was present at the time, he did not play on the track, while Keith Richards played both the rhythm and lead guitar parts. It's some of the best work Keith ever did.

As a piece of music, its most striking feature however may be the vocal of Merry Clayton. "Rape, murder! It's just a shot away"! The story of this performance was perhaps the most compelling scene in the fabulously compelling 20 Feet From Stardom which just won the Academy Award for best documentary film of 2013. See this film now if you have not. Clayton, pregnant at the time, was summoned to the studio near her home in Los Angeles in the middle of the night for an emergency undisclosed project, arriving in pajamas and hair curlers. Here is part of her vocal isolated -- listen to the break in Clayton's voice voice when she strains to shout the word "murder" even harder, it being so strong you can hear Mick Jagger react with a spontaneous "woo!":

Lisa Fisher, also featured in 20 Feet From Stardom, has toured with the Stones for decades and has done a very credible job taking on the same vocal in live performances over the many decades, as here in a remarkably good video from a small club appearance in Amsterdam in 1995: 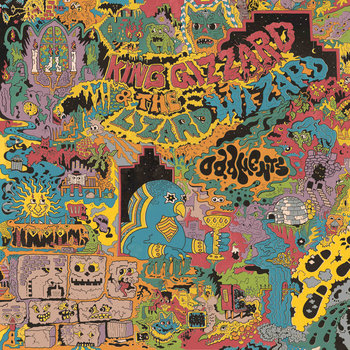 Fill Your Lungs (review here), the 2013 release from King Gizzard and the Lizard Wizard was number 18 on my year end list.  The prolific psych/garage rock collective from south Australia has quickly returned with the 12-track album Oddments.  Continuing their penchant for wide-scope musical expression, the first three tracks give an organ instrumental, the soft psychedelia of "Stressin'", and the garage pop "Vegemite".  Track four, "It's Got Old", features blues harp laced through a slacker vamp.  You get the picture, and I'm sure you'd love to have a copy of the triple gatefold deluxe vinyl or CD.  Well, sucker, you are out of luck as both those items are sole out.  And before you blame me, I'll point out that the album was released less than a week ago.  However, things are not all dark and painful as you can obtain a digital copy for ten Australian dollars at the link below.  Did you ask whether I'd convert that to American dollars or British pounds for you?  Clearly you are unaware of my math grades.  And you will remain unaware of my math grades.  Test out a few tracks below, and stream the entire album at the purchase link below.  It will be a weird and wonderful 34 minutes, but what do you expect from King Gizzard and the Lizard Wizard?

Page to purchase Oddments
Facebook
Posted by Rocksteady74 (Scott) at 3/12/2014 No comments:

As regular readers know, I was very impressed with the pre-released songs from the debut EP fromNew Zealand ex-pats Yumi Zouma.  Now that the EP is out on Cascine, the band have released paired videos for tracks "A Long Walk Home for Parted Lovers" and "Brae".  Telling the story of a fragile relationship and a budding triangle, they were created by Eugene Kotlyarenko in a stylish manner these songs deserve.  By the way, Cascine is sold out of the physical copies, but the EP can be purchased from online digital sources.

Apparently, Philadelphia's Ghost Gum has been a band for a little less than a half year, but based on this free Demos 2014 EP on their Bandcamp page, I think they already deserve a bit of the WYMA boost.  Featuring a chunky, reverb-heavy instrumental assault with plenty of bass and a vocalist that reminds me of Wendy Morgan of the Popguns (which is a way of reminding you that I love Wendy Morgan's voice), they have a sound that tickles me head to foot.  At this point, we only have the demos, but I assure you that this is a group whose show I want to see and debut album I want to own.

Ghost Gum is Ben, Arik, Travis and Carolyn.  You can stream/download all four demos at the Bandcamp link.