Video for "Don't Know Where to Go" by The New Tigers

The Badger by Finland's The New Tigers was number 15 on my list of top albums for 2013, and it was the second straight year for an album from this band to make my year-end list.  So I think it is fair to say that this band has a guitar sound that works very well for my ears.  One of the melodic standouts on the album is "Don't Know Where to Go", which is the subject of this recently completed video.  Enjoy The New Tigers.


The New Tigers - Don't Know Where to Go (Official video) from Appu Jasu on Vimeo.

I know what you are thinking -- a band named Flyying Colours with a song named "Wavy Gravy", this better be psychedelic.  Relax, it is.  But it also happens to be very good.  The Melbourne band's music is a muscular brand of shoegaze, with an aggressive rhythm section, soundscapes created via loud, heavily reverbed guitars, and male/female vocals.  Fans of My Bloody Valentine, Swervediver, Ride and The Jesus and Mary Chain will find this music particularly appealing.  Perhaps most impressive to me is that the quartet succeed in making music that is dense and loud, but still manages to be melodic and radio-friendly.  "Wavy Gravy" is the track picked for single success, but I personally find the crunching guitar riffs of "She Leaves" to be equally compelling.  And the lighter touch on the jangling "Feathers" adds a wonderful dose of sunshine.

The self-titled EP was released in Australia in 2013, but wasn't generally available worldwide.  Now it is being released in the US and the UK.  While the official release is in March, we are writing about it now because it will be available only in a limited run of 500 copies of high quality vinyl (plus a download code).  Shelflife Records in the US will have 250 on black grape vinyl, available on March 11, and Club AC30 in the UK will have 250 on royal blue vinyl, available March 10.  So if you want a copy, I suggest that you act soon.  I've been advised that there is considerable interest already.  The pre-order links are at the bottom of the post.

Here are the stream and the video for "Wavy Gravy" -- 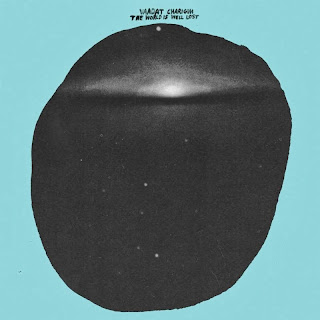 Vaadat Charigim are a Tel Aviv-based trio consisting of Juval Haring, Yuval Guttman and Dan Fabian Bloch. They've just released The World Is Well Lost, a big-sounding album with an English title that is sung completely in Hebrew, with rhythmic and guitar approaches that will be familiar all over the world. According to them, their music is "a blend of 80s Israeli underground rock with a more European Post-Punk sound". Not being familiar with the 80s Israeli underground, I would place this band at the intersection of post-punk artists Swervedriver and The Lemonheads. Haring's vocals are reminiscent of Evan Dando's, but the overall approach is a lot heavier - along the lines of Swervedriver - heavy, but catchy and plenty engaging.

There are accepted labels that certainly apply to this music - shoegaze and psychedelia for sure, but it's bigger than any one genre. The album is completely enveloping - in a way, it's like drowning in a sea of guitars. Vaadat Charigim are committed to singing in Hebrew, but that should be no obstacle to any fan of guitar rock. In fact, once you figure out how to pronounce "Kezef Al Hamayim" (pretty much the way you'd expect, but with a "hard h"), it is almost impossible not to sing along to the chorus.

Here's "Ze Beseder Lefahed", translated as "It's Okay To Be Scared" - a sentiment not lightly expressed from a band who practices in a bomb shelter:

Here's a video for "Lehitorer Velo Lada'at" set to footage edited by Yotam Wax from a 1979 animated video made by Israeli artist Dudu Geva:

And their most recent video release, "Ein Nehama Ladoachim":

Like my other favorite Israeli band Rockfour, these guys take some engaging guitar rock influences and make the sound their own. Where Rockfour was heavy on the guitar jangle, Vaadat Charigim play a much heavier sound... but they still make it catchy and, in places, interweave acoustic and electric guitars behind Haring's hypnotic vocals. The record was produced by Kyle "Slick" Johnson (Modest Mouse, Wavves, Cymbals Eat Guitars) and recorded by the band in a south Tel-Aviv apartment. The initial release was of a cassette (November 12 through Burger Records), with a vinyl release in late January via Warm Ratio. Internationally, it's available via Israeli label ANOVA (CD/digital).

They will be playing SXSW and a few other US dates in March - their first time over here.

In short: if you like guitars, this album will make your day. 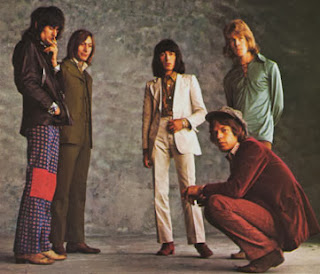 The Rolling Stones earned their reputation as masters of American blues and R&B, but they also were great interpreters and inventors of country music. One of my favorite Stones songs is "Dead Flowers", recorded in 1969 and released on Sticky Fingers in 1971. Sticky Fingers was the first LP done entirely without Brian Jones and with Mick Taylor.

"Dead Flowers" has always been one of my favorite Stones's songs, love the feel and sound of it.  Keith Richards was spending a lot of time with Gram Parsons and was heavily influenced by his Americana / country songwriting.

Here's a live version recorded in Texas in 1972. Mick Taylor's guitar work is terrific, as is Ian Stewart's piano.

The song has been covered by many, including everyone from Guns N' Roses to Miranda Lambert. But the idea to feature the song this week came from hearing Townes Van Zandt sing this line is his very striking version used in the Coen Bros. film The Big Lebowski, starring Philip Seymour Hoffman: "Ah, I'll be in my basement room with a needle and a spoon..."  Hoffman this week suffered a similar fate to Gram Parsons, some lessons being tough to learn, addiction being a powerful force.

"Hanging Around" from Full Ugly

Last August we featured a tasty guitar pop nugget called "Drove Down" (link) from Australian band Full Ugly.  For me, it was one of those tunes that made want to hear much more from the band.  Well, we are full of good news today.  First, we can tell you that the band will release their debut album titled Spent the Afternoon April 7 on Fire Records and Bedroom Suck Records.  Second, we present "Hanging Around", which is one of the tracks that will appear on the album.

Shake Some Action - Catch the Sun 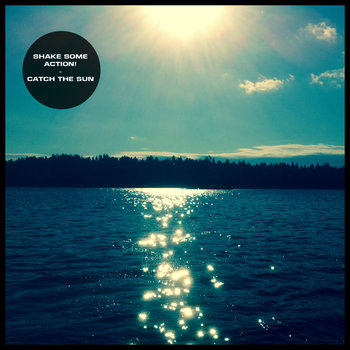 Shake Some Action is Seattle's James Hall, and we love him because he makes great, classic guitar pop, pulling in the most tasteful influences from the '60s through the '90s.  I think he has released five albums in the past, but he is on the blog today because he recently issued Catch the Sun.  The album is 12 tracks of jangling Rickenbacker goodness, and it will help chase the winter blues away.  Catch the Sun is a digital release, and interested readers should hit the Bandcamp link below. 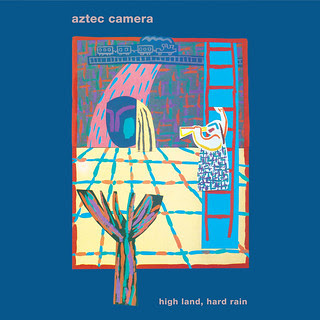 "Amazing" is a very hard-working term these days, and some of us cynics think it could use a break.  But before I tuck it in and turn or the lights, I'm compelled to recognize that the word remains appropriate from time to time.  And a prime example of something that is amazing is High Land, Hard Rain.  The early '80s were a heady time for guitar pop in Glasgow, a time that resulted in fame for Edwyn Collins' Orange Juice, Josef K, and Alan Horne's hip Postcard Records label, among others. A&R men from near and far were scouring the city for the next big talent.  And shouldering his way into the mix was Roddy Frame, whose Aztec Camera released their "Just Like Gold" single on Postcard in 1983 when Roddy was 16-years old.  There followed another single via Postcard and then, when Roddy was at the advanced age of 18, Aztec Camera released High Land, Hard Rain, their debut LP via Rough Trade in the UK and Sire Records in the US.

Roddy's songs reflected the bright sheen of new wave pop, with jazz and soul influences.  But the skeleton is Glasgow jangle and the heartbeat is the optimism and insecurity of a teenage romantic.  Bold, inspired, sincere and unaffected, some music writers considered it the best debut in pop music history.  And it performed well commercially as well, charting well in the UK and the US.

Domino Records is celebrating the 30th anniversary of the release of High Land, Hard Rain by reissuing a deluxe edition.  The record has been remastered from the original analog tapes.  For the CD version, disc 1 contains the original album, and disc 2 contains alternate and live versions.  I wondered whether the second CD was necessary until I heard it, and quickly concluded that it is a wonderful addition.  Some of the alternate takes have become as interesting to me as the track on the main release.  The vinyl version contains a download card for all the bonus material included in the CD version.

In my opinion (and the opinion of many others) there are no bad tracks.  But I think any discussion of this album should feature the opening track, "Oblivious".  Breezy, upbeat and boasting an appealing groove, it deserved its top 20 ranking.

Here is a live version of the album closer, from a 1984 performance in Madrid --


If you already are an Aztec Camera fan, you know you want this release, but I think any guitar pop fan would consider it an essential part of his or her collection.

Without talent, audacity in music is just noise.  But audacity with talent is art, and it is art that is exciting.  And a good current example is Glasgow's Natalie Pryce.  They play a bluesy, jazzy form of garage rock with a dose of cabaret theatricality.  We've featured them before, and they are back again with their first single, the double A-side "Janine" / "Bisclavaret".   Some bands want to be the stuff of your dreams, but Natalie Pryce is willing to provide fodder for your nightmares.  These songs are dynamic, and multifaceted -- burning you as they seduce you.  This may be the freshest music you've heard in a while.  I recommend it.

"Janine" features a great groove while the band tells the story of the titular young lady who haunts the narrator's dreams and leaves him for deadl  The track can be downloaded free for a limited time here.

"Bisclavaret" is about the hungry wolf that lives inside all of us.  It also is available as a free download for a limited time here.