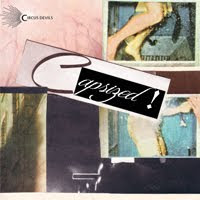 Here we are, happily listening to Bob Pollard's sixth full length release of 2011: Capsized! by the Circus Devils.

Circus Devils is Robert Pollard, Todd Tobias and Tim Tobias. They're pretty dark - what would you expect a 'circus devil' to sound like? - and they really do rock. Over their history (nine albums!), I've detected a sense of homage and inspiration from dirty 70's rock, but they are in no way limited to one type or sound, a trait that carries through on this record. Track one, "To England The Tigers", is a dreamy instrumental, almost Enoesque (sorry, had to get an -esque in there). The second song, "Capsized!" is vintage Circus Devils - bringing to mind great psychedelic craziness like "Vegas" from The Harold Pig Memorial, but also maybe Tom Waits as the tour guide on a late night Jungle Cruise. But there is melodic rock music here, too - track three is the very catchy "Cyclopean Runways" (click to download)...

On some of the harder rock songs like the pounding "Leave the Knife Curtis", Pollard shouts over the racket, but on track 9, he whispers over a gently-played piano. The track is "Vampire Playing a Red Piano" and it's Pollard describing the contents of a series of boxes. As with so much of the Circus Devils' work, you are constantly being supplied with atmosphere and imagery: imagine finding yourself in, say, a dark basement, a stranger walking up to you and whispering "Those boxes over there on the floor contain paralyzing secrets"... one of which, it turns out, is a film labeled "Vampire Playing a Red Piano".

Circus Devils is real, and Circus Devils is Pollard at his most unrestrained (which, honestly, is really saying something). There is a track called "Double Vission" which sounds very much like a twisted parody of, say, a Foreigner song, complete with the sounds of someone puking - followed by a strange little instrumental, "What Wallace". If you stick with 'em, though, the Circus Devils' next song rewards you with what is best described as sweet, soulful soft rock - "Plate of Scales". And that, to me, is the point of Circus Devils. You gotta take the whole ride, and it's a blast, but not everybody is gonna get it.

To give you a sense of their aesthetic (and just because I like it), here's an excerpt from the "forum" on www.circusdevils.com:

Oslo Peters from Oslo, Norway: When is Circus Devils going to reunite the classic lineup and play Oslo again?
Dear Oslo: We are still the classic lineup. No personnel changes have ever been made. It seems you are confused on this point. Once we toyed with the idea of allowing a non-human to join the band. We will not go into further detail. All we can say is that there were bites that required stitches, and a really big diaper bill. To answer your second question, we will not play Oslo until we get paid for the last show we did over there, and have our equipment returned. In case you have not heard the story, we were attacked by the sound man at that show. He came at us during our set swinging a lead pipe and screaming in Norwegian. Naturally, we ran for our lives.

Do you want to buy it yet? Well then, go to your local decent record store (mine's Grimey's) or to GBV Digital.
Posted by John Hyland at 11/12/2011 1 comment: Links to this post

The Soul Corner is coming up to the end of its calendar year run, and looking for the essential artists or songs we may have overlooked.
No one sang sweeter or with more feeling than the great Sam Cooke. The 1964 classic "A Change is Gonna Come" represented a significant stylistic change for Cooke. Legend has it that hearing Bob Dylan's "Blowing the Wind" while Cooke himself was being denied entry into Southern motels while on tour, inspired him to move away from his pop style hits like "Twisting the Night Away" to write something topical and from his heart. The vocal here is so weary, so heartfelt, so true:
And here's another of my Sam Cooke all-time favorites:
If you have a request for these final editions of the Soul Corner, please post them in the Comments section here or track me down. I'll be posting a survey soon on what we should do on Fridays in 2012.
Posted by Jim Desmond at 11/11/2011 3 comments: Links to this post

Today it is my privilege to review an album notable for all the right reasons, including honest and insightful songwriting and top quality musicianship and production. However, if you are like me, the most notable aspect of the album is the vocals--almost unbelievably clear but redolent of heartache, passion and intriguing depth. Yes, Shelby Earl is one of Seattle's musical treasures, and if the music world is just, Burn the Boats will bring that realization to a wide audience.

A live version of one of the album's better tracks, "At the Start"--


In her early 30s, Shelby Earl worked in jobs in the music industry, including at Seattle's Experience Music Project, for years, but it has taken a while for her to decide to become a professional recording artist. Perhaps the extra time explains her ability to create songs which so well combines youthful hope and adult realism. The result is a remarkably complete debut, devoid of artifice and indifferent to trends. And it is well worth your time.

Album track "Under the Evergreen", live at KEXP's studios:


Burn the Boats was produced (and some vocals contributions) by Seattle indie stalwart, John Roderick, whose band The Long Winters put out some of my favorite Seattle albums in the last decade. it was released November 1 on Rachel Flotard's Seattle-based label, Local 638 Records.

For your listening pleasure today, we bring you the sampler from Hozac Records, the self-described "Trojan Horse of rock and roll". Hozac Records is a Chicago label, founded in 2006, that has an interesting stable of garage/fuzz rock oriented bands, including the wonderful Wax Idols whose debut release we reviewed a couple of weeks ago (I'm still playing that one regularly, are you?). Hozac has LPs and singles, and the really great thing is that you can hear songs below and decide whether you like them. And if indecision strikes, just buy the sampler; life is good. Enjoy!

REVIEW: New Ruins - This Life Is Not Ours To Keep 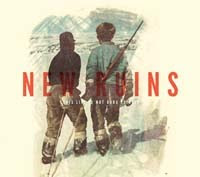 Sounding like Silver Jews in places and Richard Buckner in others, with the ability to create a wall of sound with the backbeat and bass, yet still sting you with ragged Crazy Horse riffs, New Ruins come on real strong. Other influences also portend well for guitar rock fans - they namecheck Built to Spill in track 8, "Homes of Rich Blood". First time through the record, I was impressed... a couple more times through, this might be on my "Best of 2011" list.

Here's a video of them performing "Crazy Annie". One of the things I especially like about them is their mastery of the tension/release in the guitar lines, which is featured prominently on this track. Also, three guitars!

If you like artists who combine a laid-back vocal style with all kinds of great guitars, don't hesitate. You can listen to a couple of tracks at their website:

A new song from Fear of Men -- "Doldrums"

New Sounds of Scotland-Part 29: The Creeping Ivies; The Hazey Janes

Two people can make a lot of glorious musical racket. In the case of The Creeping Ivies, from Dundee, Scotland, the two people are guitarist/vocalist Becca Bomb and drummer Duncan Destruction, who formed the band in 2010 (disclaimer: WYMA has not checked birth certificates to verify the names of the members). The music is energetic garage/punk/60s throwback, and is sounds great to these ears. While The Creeping Ivies don't have a lot of music out there for us to evaluate, a group that list their influences as The Stooges, Bo Diddley, Johnny Thunders, Ramones, Velvet Underground, The Cramps, Hasil Adkins, and Link Wray has got more than a few steps in the right direction.

Also from Dundee are The Hazey Janes--Andrew Mitchell, Alice Marra, Matthew Marra, and Liam Brennan. The Hazey Janes play muscular, crunchy indie rock. The gang recorded two albums before this year, but the second one was never released due to legal issues. Their third album, The Winter that Was, was released on October 17, 2011 by Armellodie Records.

"Carmelite" is from the new album as well--

The Hazey Janes - Carmelite from tHJ on Vimeo.

Rocksteady's Single Pick of the Week: The Louche FC - "Romantic" / "Rain and Thunder, Love Take Me Under"

One of my favorite little known bands from Manchester is The Louche FC. We featured them earlier this year and have been awaiting more music. The music this band makes pushes all the right buttons for me. On November 28 Sways Records are releasing The Louche FC's single "Romantic" / "Rain and Thunder, Love Take Me Under". While it isn't November 28 yet, the video for "Romantic" has been released, so I'm declaring it to by my single of the week.

The Louche FC - Romantic from Sways Records on Vimeo.

You can stream both tracks from the single here:


And the band has made the following track, "Hands", available for free download.
The Louche FC - Hands by sways 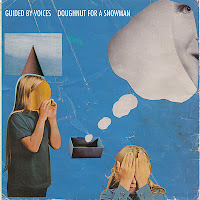 Guided By Voices - Doughnut For A Snowman by FIRE RECORDS
Posted by John Hyland at 11/06/2011 No comments: Links to this post